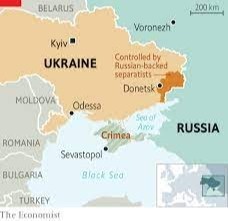 Russia, Ukraine, and Your Portfolio

After a partial recovery from bouts of volatility in mid-January, markets have turned bumpy again over the past few weeks.  Several concerns have contributed to these movements. These include recent Russia-Ukraine events as well as inflation and interest rates. We know that these headlines and market gyrations can be concerning. Afterall, they affect your portfolio and your ability to achieve your goals.

Russia and the Ukraine

The latest Russia-Ukraine tensions have been simmering for months. The potential effects have caught the attention of world governments and financial markets. U.S. equity markets posted back-to-back losses for the past two weeks. Last week, the Dow Jones Industrial Average fell just under 2%. Interest rates, which had been rising recently, modestly reversed course as buyers sought the safety of U.S. Treasuries.

After months of posturing and provocation, Russian President Vladimir Putin said Monday, Russia would recognize two breakaway regions within Ukraine. Putin then ordered Russian forces into those areas. The United States and European allies quickly announced sanctions. More are likely to come. These events and market reactions are fluid, and we continue to monitor them.

Our approach to managing assets includes perspective, a knowledge of market history and restraint. A closer examination shows that Russia-Ukraine conflict is not new. The tensions go back to the dissolution of the Soviet Union in 1991 when the country was dissolved into 15 independent states.  As the second most populous state, and given its strategic access to the Black Sea, relations with Ukraine were often strained.

In 2014, Russia invaded Ukraine and seized control over Crimea, a highly populated and strategic area of Ukraine. As in the current situation, sanctions and international outrage and saber-rattling followed. It is important to note that while foreign relations are important and often affect world investment markets, they do not control them. With all of the headlines and instability surrounding the Russian invasion of Crimea in 2014, the DJIA was up 7.5% that year.

Inflation concern was heightened last week when the Bureau of Labor Statistics reported that the Consumer Price Index, a widely watched measure of inflation, rose 7.5% for the trailing one- year period. This was higher than the 7.2% expectation. The jump was fueled by significant leaps in energy, vehicles, and grocery items. It is likely that at least some of the price surges are related to the reopening of the economy. The question is how long these rises will persist.

Another concern is rising interest rates. Unfortunately, many media reports, by their structure, are limited to short sound bites like, “Interest rates surge.” Of course, this is of little help in analyzing the situation. We can do better. As always, examination of how we got here can help put things into perspective.

One of the rates most often discussed is the 10-year note. This frequently serves as a benchmark for setting longer-term rates like commercial and residential mortgages. This rate is not directly set by the government. It is determined by market forces. As the reopening has haltingly progressed, rates have gone up. News reports are correct that on a percentage basis, rates are up a headline-grabbing 70%. It is important to note that the 70% increase is a move from 1.2% to roughly 2%. For perspective, the 10-year was roughly 3% just over three years ago.

How inflation and the Fed discount rate are related

Another important interest rate is the Fed discount rate. This rate is set by the Federal Open Market Committee, which is part of the Federal Reserve. It is used as part of monetary policy to attempt to help smooth the inevitable boom and bust cycles that the economy experiences at times. The discount rate has only been this low twice in recent history. This was during the 2008 Great Recession and again during the 2020 pandemic.

Low interest rates and other stimuli went a long way in keeping the pandemic from having far worse effects on the economy. Now, this stimulus must be withdrawn, and the rates are intended to rise. This isn’t necessarily a bad thing.

By raising the discount rate slowly and persistently, the Fed intends to cool the economy and quell inflation. The expected rate increases, at least at this point, could have a way to go to return to normal. In pre-pandemic 2019, the discount rate was 3%. The discount rate has been both very high and very low over the past 50 years.  The rate has mostly been in a range of 2.0% to 5.0% that has often been seen as a sweet spot for the economy, far above the current near zero rate.

While the rise in the discount rate could pressure certain bond returns in the near-term, there is a potential bright side for fixed-income investors. As rates rise, investors may be more reasonably compensated for their investment. Continued low rates, on the other hand, would mean an extension of the fixed income drought over the past few years.

These probably feel like uncertain times. Inflation has risen considerably due to the reopening of the economy. The Fed has signaled that to combat inflation it intends to raise interest rates for the first time since 2015. It can be a little overwhelming. But uncertainty is nothing new in investing. Tolerating uncertainty and volatility are parts of the value proposition of investing in equities. The key is to examine the risk one is assuming and measure the potential impact in advance. We do that.

For the short-term, long-term, and anything in between, we are here.

Over the last few years, we have been through the pandemic and a brutal bear market.  Over the longer-term there have been many other significant challenges. We made it through, based on our solid principles of mathematics, a knowledge of market history and restraint. Of course, our work isn’t finished. It never is. We stand by, ready to serve. Please feel free to contact us with your thoughts. We are here.